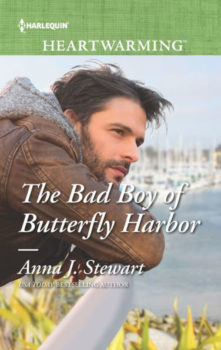 The Bad Boy of Butterfly Harbor

Two things keep Holly Campbell grounded: her precocious son and preserving her forty-year-old family diner in the face of expansion and change. She doesn’t need a blast from the past like Luke Saxon, who’s back in Butterfly Harbor after more than a decade away. The hard-luck kid who nearly destroyed her family, leaving her to pick up the pieces, is taking over as sheriff. She can’t trust him, even if Luke’s ideas for the town’s upcoming anniversary seem to show he’s trying to give back to their community. Has Butterfly Harbor found its unlikely savior? And has the widowed single mother finally found a man she can believe in, rely on…and love?

Holly’s entire body froze as if she’d locked herself in  the walk-in freezer. Then her knees wobbled, but she kept her spine stiff and her voice low as the anger she thought she’d buried over a decade ago rumbled up from her toes. “Luke Saxon.” She shoved her hands into her back pockets and tried not to notice how quiet the diner had become.

She pressed her lips together so hard they went numb.

Every town, even Butterfly Harbor, had its bad boy. That boy who wore a black leather jacket and snug jeans to the point of female distraction. The boy who exuded a mind-numbing combination of hostility and romanticized misunderstanding. The boy every girl wanted to date but none dared approach. The boy other boys wanted to emulate, but none thought to befriend. Yeah, there were bad boys.

And then there was Luke Saxon.

And he still wore a black leather jacket and carried himself with a self-assuredness that was both enviable and off-putting. His onetime too long ink-black hair had been shorn into shape, his pasty complexion replaced by what looked like years spent in the sun. The sad stone-blue eyes she remembered in the face of a sullen boy had turned to steel in the span of twelve years. She saw life painted on his handsome face.

He’d grown up. Holly straightened. They both had.  While Luke stood before her as a man, she couldn’t help but see the troubled—and dangerous—youth she remembered. His reputation for skirting the thin edge of the law had become legend in Butterfly Harbor.

“I’ll understand if you’d rather I eat someplace else.” The low rumble of Luke’s voice sounded foreign to Holly’s ears and prickled her skin. In her mind Luke was still eighteen, smelling of beer, blood and guilt rather than the intoxicating combination of sea air and orange spice.

“You know what Grandma Ruby always said.” Holly forced the words from her tight throat. “Everyone’s welcome at the diner.” Even you.

“I heard she passed.” Luke pushed his hands deep into his jacket pockets, rocked on his heels as he kept his chin up, his gaze pinned to hers. “She was always very nice to
me.”

Holly cleared her throat and wished her grandmother was here right now—she’d always known what to say. “Thanks. You eating alone?” She grabbed a menu out of the cubby at the end of the counter and tried not to notice how her hand trembled.

“Sorry I’m late.” Butterfly Harbor’s new mayor, Gil Hamilton, pushed through the door and swept his long sandy-blond hair out of his eyes. “Hey, Holl. Must be a blast from the past, huh? Having Luke back?”

“Not to stay?” Holly blurted.

“A year, at least.” Gil slapped a hand on Luke’s leatherclad back as Luke winced and stepped to the side, the color draining out of his windblown face. “That’s how long his term will be. This time around anyway.”

“His term?” Holly asked as her stomach churned. “What term?”

“Oh, sorry.” Gil blinked and cringed as if he’d betrayed a confidence. “I thought for sure your father would have told you by now. Luke’s serving out the rest of Jake’s tenure as sheriff.”

“Sheriff.” Holly didn’t recognize her own voice, not hidden under the layers of hostility and anger. “You’re not serious.” When Gil’s only acknowledgment was to grab the menus and head toward a booth at the far end of the diner, Holly swung on Luke. “He’s not serious?”

“What? It wasn’t enough you almost killed my father all those years ago? You figured you’d come back and finish him off by stealing his job?”

Luke’s steely blue eyes narrowed. “It’s not like that.”

“From where I’m standing it’s exactly like that.” She moved in, keeping her voice low so her customers—so her son—wouldn’t hear. “Go back to wherever you’ve been for the past decade, Luke. We don’t have any use for cowards in Butterfly Harbor.”

“In this heartfelt story of redemption, readers will enjoy multidimensional characters who set out on an emotional journey toward forgiveness. From animosity to honesty, this passionate tale of atonement is a guaranteed page turner.”

“The Bad Boy of Butterfly Harbor by Anna J. Stewart is well-written and filled with likeable characters. There are plenty of laughable moments, but it also tackles serious topics such as alcoholism and child abuse. These aren’t easy things to cover but Anna handles them well. This was my first time reading anything by this author, but it won’t be my last.”

“This book is heartwarming.  It’s about forgiveness, trust, honor, respect, acceptance and love.  I highly recommend this book and cannot wait to read the next installment to find out what happens with some of the other characters.”

“A beautiful story about people in a small failing community, fighting back to build up the town again, and the human destinies of the small town. An inspiring, heartfelt, and sweet story of a town folks, that are willing to do the hard work, to put their home back together again.”

“This book felt to me like made for TV, feel good film.  I would watch this book on TV!  I enjoyed my time in Butterfly Harbor and look forward to going back again with another character.”

~Getting Your Read On

“I loved this book! For one thing, it was totally believable. You know sometimes you read a book and you think, “This totally cannot happen.” Well, this story totally could. I love how real the characters in this story are. They are very well-developed and totally make you feel like you know them in real life. I love the setting of the story and the story itself. It is a clean book, yet it is filled with true romance. I love that! It is so amazing to see the forgiveness and love once Holly finds out that she’s been looking at the situation through her own bitterness and not looking for the truth. The supporting characters in the story are just as great as the main characters. I can’t wait to read the following books in this series. I highly recommend it!”

“A touching story about redeeming yourself after a past you are not proud of.”

~Thoughts of a Blonde

“Author Anna J. Stewart’s latest Harlequin Heartwarming novel, The Bad Boy of Butterfly Harbor, is a beautiful and inspiring story about learning from current and past mistakes, forgiveness, change, and love and friendship not only between adults, but children as well.”

“The love story is sprinkled with some smiles, but also with dangers, most of them brought by the heroine’s son. The dangers in question will threaten a possible HEA, will spice the story and will fuel up the pace and tension in it. Told in an attractive style, THE BAD BOY OF BUTTERFLY HARBOR will be appreciated by those who enjoy a clean, but not a dull romance. I know I read it with pleasure.”

“This is a really beautiful book, beautiful in the sense of how the story was told with so much simplicity and genuine emotions. This book revolves around second chances, forgiveness, acceptance, and moving on.

Something that’s a very important thing and not many people find it in them to do. . . . It’s a very thoughtful and sweet book. While it’s an easy read it will give you a lot to think about.” 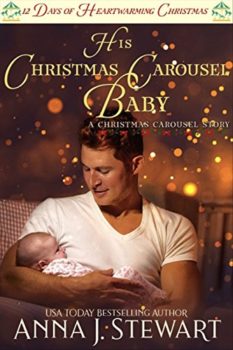