Anna first discovered miniatures while she was in college and a friend took her to THE ELEGANT DOLLHOUSE, a local store in Sacramento. She soon finished her first dollhouse, but became enamored with room boxes, or, one room scenes in 1″ scale. Here are a few of her completed projects…some she’s actually kept for herself.

Named after one of the main heroes in Sherrilyn Kenyon’s Dark Hunter series, this Greek inspired bistro also reminds Anna of the few weeks she spent in Greece in her teens.

From Dusk Till Dawn 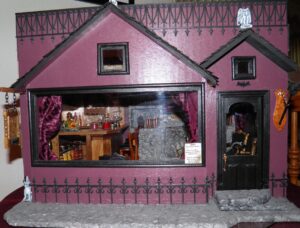 Yes, she has an obsession with vampires (not the ones who sparkle). 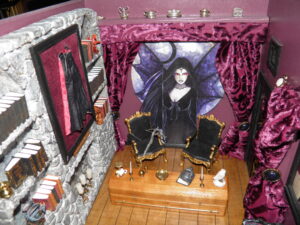 This pub was inspired by the Jessica Galbreth image on the far wall. 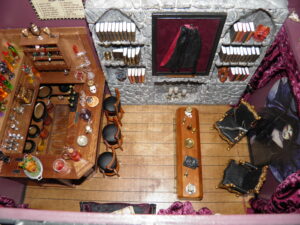 The “coffin” table was an idea from one of Sherrilyn Kenyon’s novels, and the name comes from the George Clooney movie.

“BEEN THERE” TRAVEL TRAILER 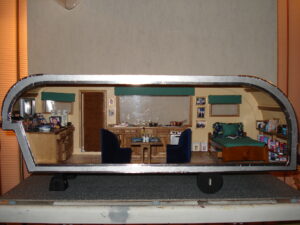 Anna made this for her good friend Judy Ashley for Christmas a few years ago. Judy and her husband Bob are avid travelers. Inside are lots of treasures representing Judy’s likes, photos of her friends and family, and of course, Cheetos, French Bread, and a CD of Rod Stewart, Unplugged…the three things Judy can’t live without. This project won honorable mention in the 2010 CA State Fair, scale models division. 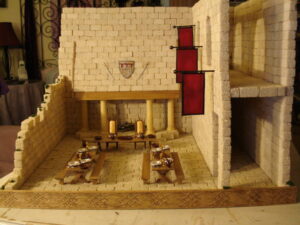 Another project made for a friend…this one was created especially for Cari Gunsallus, as a thank you for her service as President of the Sacramento Chapter of RWA. She jokes that this display is the reason she agreed to a second term. The design is inspired by a castle in Scotland that Cari visited a few years ago. It was fun to make…and yes, it was done “brick by brick.” The tables, benches, and fireplaces were all handmade. A true labor of love for one of her best friends. An update: Alas, when Cari moved across the country, this project did not survive the trip. But Anna sent her a replacement (albeit smaller version) the following Christmas. 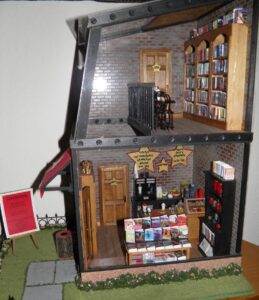 This project has a fun history. Anna made it to auction off on Brenda Novak’s Online Auction for Diabetes Research a number of years ago and it was won by NYTimes Bestselling Author Allison Brennan. Unfortunately, Allison didn’t have the right display place for it, so she’s “loaned” it back to Anna until she has a place (Anna selfishly hopes she doesn’t as it’s one of her favorite projects). Inspired by her love of books and writers’ obsession with coffee, STARBOOKS is the only two story project she’s finished so far…she made the espresso/coffee machine out of old plastic containers and the pastries are made out of clay. The cups are actually glue caps and the books lining the shelves are some of Anna’s favorites. 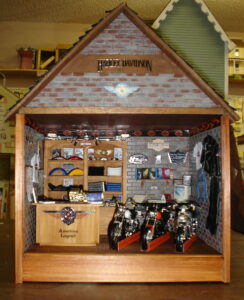 Anna made this for her “little sister” Jessica Bogard, aka Ripley…an avid Harley Davidson fan. This was another fun project, but Anna never wants to have to build another Harley Davidson Motorcycle from a kit again.

On her list of things to do…a Pride and Prejudice Regency Dollhouse (complete with a Mr. and Mrs. Darcy), Tinkerbell’s cottage, a Tudor style Cottage, and a 1″ scale 1967 Chevy Impala inspired by the Winchester Brothers of the TV Show SUPERNATURAL. 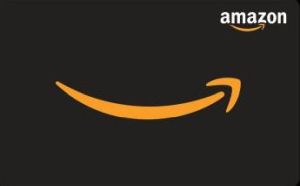 Anna J. Stewart is giving away a $10 Amazon gift card to one winner.